– New versions of myMail and Mail.Ru email apps: with fast photo attaching on iOS and offline search and separate version for tablets on Android

– Secure email collection from and into Mail.Ru inbox via OAuth 2.0 protocol

– Cloud.Mail.Ru updated with online image editing on web, video streaming of all formats on all devices and screen grabber in desktop apps

– Video service relaunch in VK, including video catalogue with recommendations and licensed content as well as multiple new features

– Native advertising in VK newsfeed on both desktop and mobile

– Launch of Snapster: a new photo app by VK with photo editing, enhanced filters including new filter creation and sharing as well as self-destructing messages

– Multiple updates of OK.RU photo and video services in web and on mobile apps, including live streaming of events and video channels in groups

– New video player with adaptive streaming and photostreams in OK.RU apps for iOS and Android

Commenting on the results of the Company, Dmitry Grishin, Chairman and CEO (Russia) of Mail.Ru Group, said:

In H1 2015, the Company achieved revenue growth of 6.9% Y-o-Y to RUR 18,301 million. As in previous reported results the revenue growth rates are based on a full pro-forma consolidation of VK from the beginning of 2013. Despite a challenging FX backdrop we have continued to exercise tight cost control during H1 and as a result have an H1 EBITDA margin of 49.9% with segment H1 EBITDA of RUR 9,130 million. As a result of the interest payments on the loan connected to the acquisition of VK net income declined 10.5% to RUR 5,606 million.

With the ongoing economic and geo-political situation the overall operating environment in H1 2015 remained somewhat challenging. However during Q2 we have seen some stabilization in the advertising environment. Targeted advertising, especially mobile and VK saw strong, and improving, growth rates. At this point visibility remains limited, and it is too early to say if these trends will continue, however Q3 advertising has thus far had a solid start.

VK integration is on track and the team continues to execute well. In Q2 VK revenues grew 41.4% to RUR 1,408 million. As previously commented the focus for 2015 in VK will be the continued expansion of video and mobile advertising where we continue to see strong advertising interest and execution. With H1 revenue growth of 34.4% and limited increase in costs we are pleased to announce that VK margins have increased from 34.4% in H1 2014 to 47.3% in H1 2015.

In H1 our MMO revenues grew by 1.4%, Q2 was affected by a high base effect from Q2 2014 and limited revenues from the new games. The outlook for H2 remains strong and we are pleased to announce that Skyforge has now started its international release and reception has been encouraging. In Q2 Armored Warfare started its closed beta test in Russia with the international closed beta in August. The full release in Europe, North America and Russia is currently scheduled for H2 2015. World of Speed closed beta test is also planned for H2 2015.

Community IVAS revenues showed solid growth in H1, growing ahead of the increase in the user base as we continue to focus on increasing paying user penetration – especially in virtual gifts and services, as well as in our API platform. We remain focused on increasing user engagement and improving our product. We would expect that FY IVAS revenue growth is likely to be slightly below the total revenue growth.

Our other revenue stream remains very sensitive to the underlying economic environment and hence saw revenues decline by 3.5% in H1. We do not anticipate any near term improvements in this revenue stream.

Our international expansion continues and we remain encouraged by the traction of myMail which continued to gain traction in H1. The US is the largest market followed by France, UK, Germany and Brazil. We will also look to leverage the myMail user base with through the international release of games later this year.

Despite the continued challenging macro environment we have had a solid first half of the year. We are encouraged by the traction in target and VK and continue to see a number of exciting opportunities in these areas. MMO has a busy second half with a number of releases both in mobile and desktop games. Based on current visibility and current market conditions, we are pleased to re-iterate our FY 2015 guidance of revenue growth (including both VK and Headhunter on a pro-forma basis) to be between 7%-12%, however given the continued strong cost control and the good revenue, and hence margin growth, in VK we now expect FY EBITDA margins of between 47-48% vs previous guidance of between 46-47%.

The Mail.ru Group management team will host an analyst and investor conference call at 9.00 UK time (11.00 Moscow time), on Thursday 20nd August 2015, to discuss details of the Company’s performance and certain forward-looking information. The conference call will include a Question and Answer session.

To participate in this conference call, please use the following access details:

This press release contains statements of expectation and other forward-looking statements regarding future events or the future financial performance of the Company. You can identify forward looking statements by terms such as "expect", "believe", "anticipate", "estimate", "forecast", "intend", "will", "could", "may" or "might", the negative of such terms or other similar expressions including "outlook" or "guidance". The forward-looking statements in this release are based upon various assumptions that are inherently subject to significant uncertainties and contingencies which are difficult or impossible to predict and may be beyond the Company's control. Actual results could differ materially from those discussed in the forward looking statements herein. Many factors could cause actual results to differ materially from those discussed in the forward looking statements included herein, including competition in the marketplace, changes in consumer preferences, the degree of Internet penetration and online advertising in Russia, concerns about data security, claims of intellectual property infringement, adverse media speculation, changes in political, social, legal or economic conditions in Russia, exchange rate fluctuations, and the Company's success in identifying and responding to these and other risks involved in its business, including those referenced under "Risk Factors" in the Company's public filings. The forward-looking statements contained herein speak only as of the date they were made, and the Company does not intend to amend or update these statements except to the extent required by law to reflect events and circumstances occurring after the date hereof.

Mail.Ru Group (LSE:MAIL, listed since November 5, 2010) is a leading company in the Russian-speaking Internet markets (Russia is Europe's largest Internet market measured by the number of users, comScore). Mail.Ru Group's sites reach approximately 96% of Russian Internet users on a monthly basis (comScore, June 2015) and the Company is the sixth largest Internet business globally, based on the total time spent (comScore, June 2015).

The Company holds minority equity stakes in Qiwi (1.31%) and a number of small venture capital investments in various Internet companies in Russia, Ukraine and Israel. 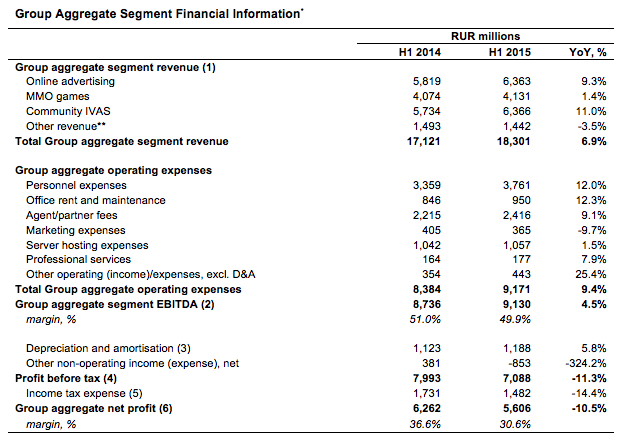 Note: Group aggregate segment financial information for the six months ended June 30, 2014 has been retrospectively adjusted to include pro-forma consolidation of VK and ICVA from January 1, 2014

We identify our operating segments based on the types of products and services we offer. We have identified the following reportable segments on this basis:

The Social Networks (excluding VK) segment includes our two social networks (OK.RU and My World) and earns revenues from (i) user payments for virtual gifts, (ii) revenue sharing with application developers, and (iii) online advertising, including display and context advertising.

The Online Games segment includes online gaming services, including MMO, social and mobile games. It earns almost all revenues from (i) sale of virtual in-game items to users and (ii) royalties for games licensed to third-party online game operators.

The VK segment includes the Company’s social network Vkontakte (VK.com) and earns revenues from (i) commission from application developers based on the respective applications’ revenue, (ii) user payments for virtual gifts and stickers, and (iii) online advertising, including display and context advertising.

The E-Commerce, Search and Other Services segment primarily consists of search engine services earning almost all revenues from context advertising, e-commerce and online recruitment services (HeadHunter and Rabota.Mail.Ru) and related display advertising. This segment also includes a variety of other services, which management considers insignificant for the purposes of performance review and resource allocation.

As of 30 June 2015, the Company had RUR 4,977 million of cash (including term deposits) and RUR 19,136 million of debt outstanding (excluding interest payable of RUR 121 million), therefore the Company's net debt position was RUR 14,159 million.

Filing of the Report

The Company's interim condensed consolidated financial statements for the six months ended 30 June 2015 prepared in accordance with IFRS and accompanied by an independent auditor's review report have been filed on the National Storage Mechanism appointed by the Financial Services Authority and can be accessed at http://corp.mail.ru/media/files/mail.rugroupifrsh12015.pdf

– The Company's segment financial information excludes certain IFRS adjustments which are not analysed by management in assessing the core operating performance of the business. Such adjustments affect such major areas as revenue recognition, deferred tax on unremitted earnings of subsidiaries, share-based payment transactions, disposal of and impairment of investments, business combinations, fair value adjustments, amortisation and impairment thereof, net foreign exchange gains and losses, share in financial results of associates, as well as irregular non-recurring items that occur from time to time and are evaluated for adjustment as and when they occur. The tax effect of these adjustments is also excluded from segment reporting.
– The segment financial information is presented for each period on the basis of an ownership interest as of the date hereof and consolidation of each of the Company's subsidiaries, including for periods prior to the acquisition of control of the entities in question, so long as the Company held at least one share of such entities during such periods. The financial information of subsidiaries disposed of prior to the date hereof is excluded from the segment presentation starting from the beginning of the earliest period presented.
– Segment revenues do not reflect certain other adjustments required when presenting consolidated revenues under IFRS. For example, segment revenue excludes barter revenues and adjustments to defer online gaming and social network revenues under IFRS.

A reconciliation of Group aggregate segment revenue to IFRS consolidated revenue of the Company for the six months ended 30 June 2015 and 2014 is presented below:

A reconciliation of Group aggregate segment EBITDA to IFRS consolidated profit before income tax expense of the Company for the six months ended 30 June 2015 and 2014 is presented below: 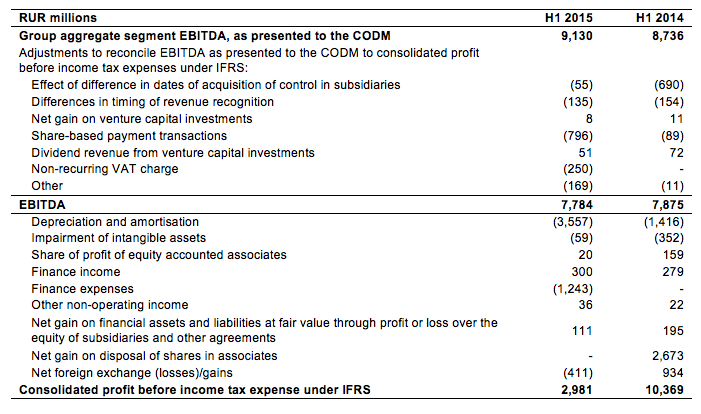 A reconciliation of Group aggregate net profit to IFRS consolidated net profit of the Company for the six months ended 30 June 2015 and 2014 is presented below: